Edit: Prezi have decided to pay me for my findings, I have included a brief update at the end of this blog post.

Recently, I participated in the Prezi bug bounty with high hopes of finding some web application flaws. I had spent a total of 2 hours sifting and crawling through their services which were in scope, but wanted to see if I could locate any other subdomains, with the assistance of google.

Soon enough, I found "http://intra.prezi.com:8081", running Sonatype Nexus (A source code/repository management tool). Whilst it is now restricted, at the time I found it, it was open to the world, and all I required was a username and password to access precious Prezi source code.

Logically, I searched the very same Nexus repository URL in Google, and found something incredibly shocking, for such a big company like Prezi.

One of the developers of Prezi (Adam

In his public repo, I had found a config file, including the username and plain text password for the Nexus repo:

I checked if the credentials were valid. They were. I sent them off to Prezi Site Security, within 10 minutes of myself logging in. 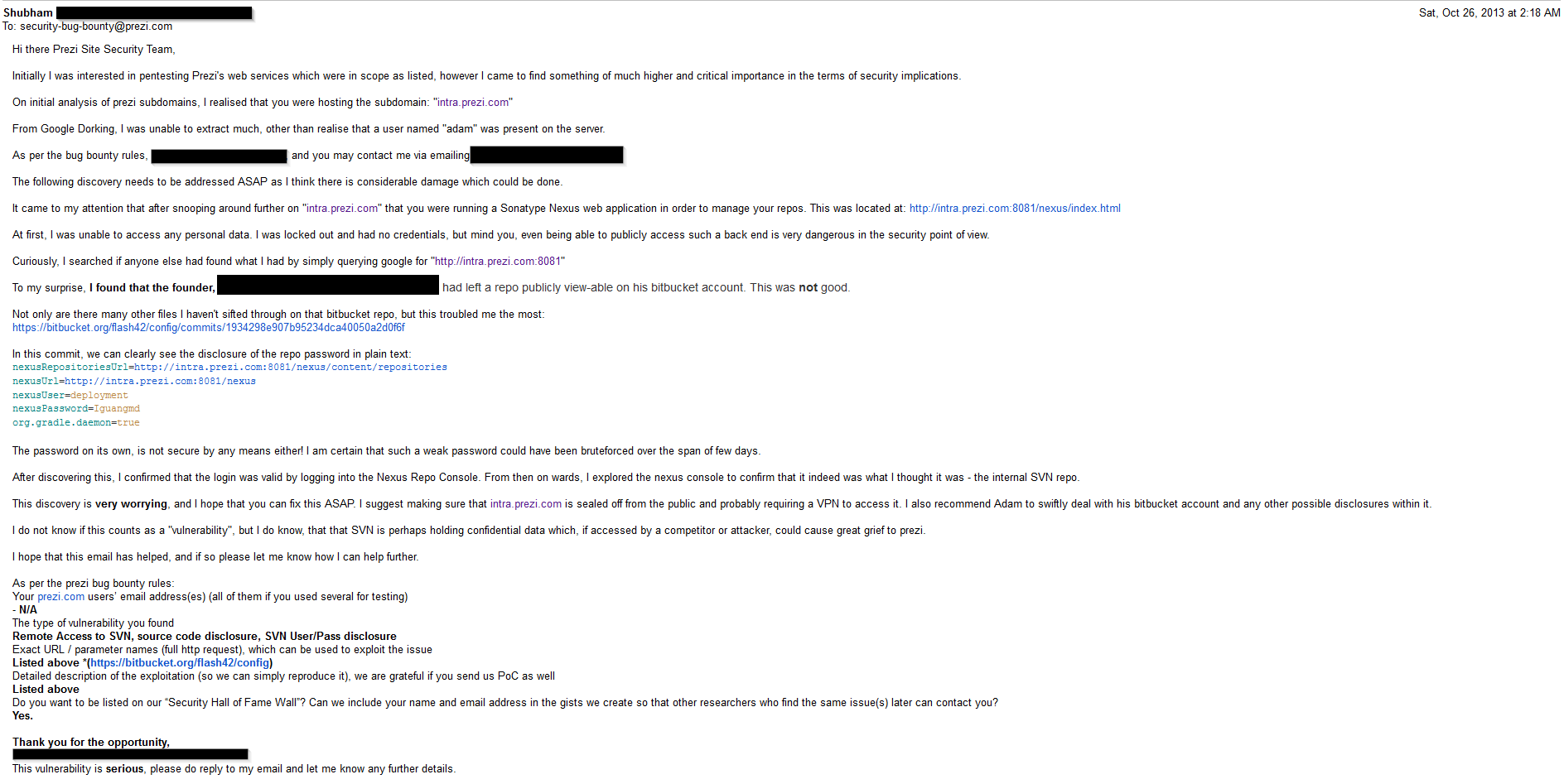 Around an hour and a half later, I had received an email from Attila

At this stage, I was happy that they had "approved" my discovery and had "fixed" the issue temporarily by changing the credentials.

However, came the following Monday, in which I received no response...

I waited till Thursday (31st of Oct), and then decided to follow up on the status of the issue's severity. I emailed:

I got a disappointing response:

I replied with my address, as well as my justification for why their decision was wrong.

However, after my response to the above email, I received no response confirming their acknowledgement. Whilst waiting for their response, I realised that I would rather not accept their "swag", and decided to instead, send off an email indicating why I wished to walk away with nothing.

I don't think I'll be participating in the Prezi bug bounty anymore.

Anyways, they did try and get it right, by emailing me an apology as well as responding to my constructive criticism. This blog post, is by no means attempting to discourage people from participating from Prezi's bug bounty, but rather just a blog post about how finding Prezi's source code was not eligible for their bug bounty.

Please be aware of what you put up on github/bitbucket.

I have accepted their apology, and replied with the following:

I have included these new emails in the letter log initially posted.